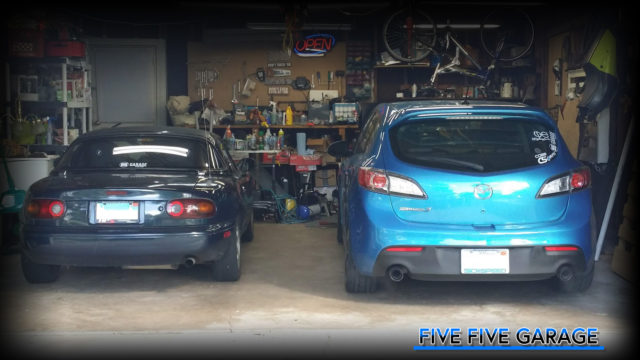 Greetings and salutations! It is already the first week of February and I am ready for spring! I was able to survive the Polar Vortex/ Polarocalypse/ crazy cold weather we had here towards the end of January, but unfortunately one of my stable was not so lucky. Project TB had an unfortunate run-in with a garbage truck while parked and took a hit. The damage was mostly just a cracked bumper cover (it was so cold that day, the bumper just cracked instead of being pliable), but has been driving me nuts as I want to fix it and the weather just won’t cooperate! It is either bitterly cold or raining. My cabin fever is making me bonkers too!

Where was I again? Oh yeah, Its February!

For most people, February means tax return time or as I like to think of it, final preparations for the yearly car parts budget! Hopefully all of you have been reading the Start-Up series and are doing your homework to figure out what direction you want to take your builds this year! While I was in the grips of the Polarocalypse (and I was able to take off two days from work), I had a bit of time to really sit down and reflect on the direction my life is headed in and what I am doing when it comes to my hobbies, specifically Five Five Garage.

When I first decided to do this in 2017, I never thought that I would have made it this far. I originally decided to make a YouTube channel after owning my Mazdaspeed 3 for a few years and noticing that the content and information out there for the BL platform (2nd generation Mazda 3 chassis code) was scattered all over the internet. Some information was outdated, some was buried deep inside forums, and sometimes the information that I found wasn’t easily understood. I figured that if I could create a repository for the information that I collected and have it easily accessible it would be a boon for everyone, right?! So after some soul searching, a conversation with my very supportive girlfriend Amy, and help from my friend Matt, I bought a camera and Five Five Garage was born.

Being on YouTube seems kind of glamourous at first. You make business cards, you tell everyone about your channel, living the dream! But the part that you really don’t get until you are deep into it, is that is it a lot of HARD work. Making a 10 minute video may not seem like it takes much, but I can tell you that 10 minutes of edited video, with sound correction, titles, music, and a quality pass takes me on average 6 – 8hrs of straight work time. Some of the longer videos (like the RaceWorks video) can easily double or triple that amount of time. Trying to figure out how to do all of that, while I am working my actual job is a pretty daunting task. It is also why my release schedule is all over the place. I really would like to have a set in stone release date, but I usually release when I have a window of time free. I often grapple with not including as much information in the videos to make them shorter (and by extension, less work for me), but I want to try and give the viewer as much info as I can so they can make the decision for themselves if it might be something they would buy for their project, instead of me just going “here is a part I got” and install it.

After having sometime to look back what I did in 2017 and 2018, I realized that I could do more, and I want to do more! So once again, I had a talk with myself, my family, and my support system and I came to a decision.

What I Am Going to Do

I have been sitting on some behind the scenes projects, as I contemplated what I wanted to do with Five Five Garage. I want to expand. I want FFG to get bigger. I want to be able to do larger projects! I have a notebook (you all know how I love notebooks!) full of project ideas that I want to do, but space and a lack of capital scuttles my plans. YouTube is paying me pennies (literally), so after months of brainstorming I came up with this:

I created a Spreadshirt shop for Five Five Garage gear! There are a couple of designs of the current logo, as well as Molly the Boost Cat (Amy has been bugging me for almost a year to release these!). I plan to update designs regularly (I have ideas for my project Miata, my CBR, and maybe even the Trailblazer) as well as add in hats and hoodies. I am really excited about this and can’t wait to drop some new items and designs!

I also decided to create a page on Patreon and I am really excited about this one as well! I am looking forward to showing you guys some behind the scenes stuff that goes on while I am creating content for FFG. I have all these little videos that never make it into my YouTube videos that I want to share but wouldn’t make sense to upload to the channel. Funny clips of me losing all my 10mm sockets (this happens a lot), hints and tips about things that aren’t car related (like what goes on during editing) or even just little daily vlogs (this is an idea that I am thinking about for the next phase, more about that in a minute) about what is going on with the channel. There are also some great Patreon specific awards as well, custom decals, clothing, and some other things I am working on that I don’t want to spoil just yet!

I spent many long hours contemplating these two moves. I did a lot of research, asked a lot of questions, and listened to a lot of feedback. After going back and forth trying to decide what to do, I felt like these two deals would be helpful to me and the channel as I plan to make the next move.

Where I Am Going

So what does all of this mean and what does it all add up to? The answer to those questions is the whole reason I decided to write this blog and get all of the ideas that have been swimming in my head out into the universe. The answer is…

I want to get a heated shop space this year.

Working in my garage is great, because I already paid for it and I like to show that the same things that I am working on can be done in a home garage. The downside is that I can’t fully dedicate the space to working on cars and recording video. As I acquire projects and tools, I am running out of space. In the warmer months, I am able store things outside while I film, that allows me the space to do the work, plus setup all the cameras/lights so I can record. As the weather gets colder, I no longer have that luxury of storing things outside and even with a heater, my garage isn’t that well insulated. I miss making videos when it gets colder and I also feel like the channel loses momentum (actually it does when I look at my YouTube statistics) which is hard to get rolling again in the spring, if I am going to improve the channel, something has to change.

The upside of getting a heated shop space has me really jazzed! I can dedicate the space to just working on cars and recording video! Being able to setup all of my lighting and camera positions (and being able to leave them, no more having to setup and tear down shots) is a huge bonus. There will be space so I won’t have to play musical chairs with vehicles and can tackle some of the harder projects that I want to work on, without having to worry about putting the car together right away to fit everything back into my garage. As it is heated, when the weather here begins its decent into the frosty range of the thermometer, I can keep working on my projects and you all get to see FFG videos on a more regular basis!

And I will have the space for a lift!

I want to get a two post lift so when I am recording things under the car, I can get the lighting proper and the right camera angles so I can show and explain things in better detail. Plus, I won’t have to shimmy on the floor, I am getting older, sometimes when I get down there it takes a while to get back up!

I wish it all sunshine, roses, and positive upsides, but there are some downsides to this idea. I have crunched the numbers, and I can do this now but it is going to affect my parts acquiring budget. A lot. So while I will be able to make more videos, I won’t have as big a budget to buy parts, tools, and accessories. I have had suggestions to start a GoFundMe page, but I didn’t want to do that, I felt like that way was akin to me holding my hand out and saying give me money so I can do this. That is not what I wanted.

I created the Spreadshirt and Patreon accounts as a way I could say thanks for supporting me as I set out to make the next step. The fact that there are people that would like to support the channel is mind blowing already, and I am even more humbled that people would want to wear designs I have come up with and enjoy the things I create. I keep being surprised every day!

To each and every one of you, I want to say thank you. As I start ramping up the FFG content machine for 2019, I wish you the best of luck with your projects and that we will all be able to Zoom-Zoom this summer and beyond!

Tootin’ My Horn: Upgrading to a Dual Horn Setup

Start-Up: The First Modifications You Need To Do