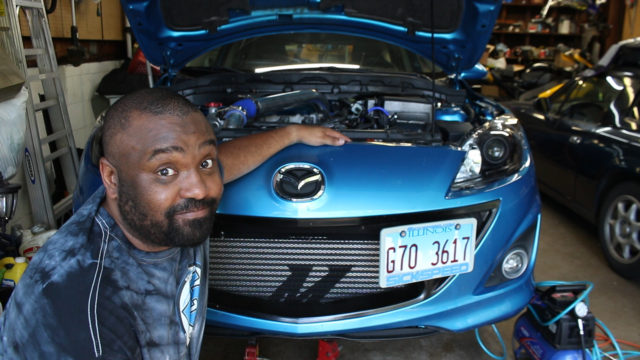 If you have been following along with me as I delve into the world of tuning my Mazdaspeed 3, you will be aware of the bevy of parts I have added to the car in the search of more horsepower. Intakes, boost controllers, and Accessports aside, there is one upgrade that sometimes leaves people scratching their heads trying to figure it out. Well make that two, figuring out what size turbo one should buy is number one.

Number two? Do I need an intercooler/what size intercooler should I get? There is a lot of information out there on intercoolers: how they are constructed, fin density, one piece end-tanks, air-to-air or air-to-water, etc. So much information in fact, that I decided to write a separate Start-Up series article about them, instead of trying to cram all that information into this one. This article is going to be centered more on my experiences with the CX Racing 2.5″ intercooler that I installed on my Mazdaspeed 3, and the core that replaced it, the 3″ S-Line intercooler from Mishimoto Automotive. On paper, both are intercoolers and both are made from aluminum, but the performance they deliver differs greatly. How so? Read on.

The CX Racing intercooler is 2.5″ thick core with a 2.5″ inlet and outlet. According the CX Racing site (https://www.cxracing.com/intercooler-kit-mazda-mazdaspeed3/KIT-MS3-2G-IC0036-M-BOV009) this core has a 48% increase in surface area over the stock top mount intercooler, which should (and actually does, more on that in a minute) allow this intercooler to lower the charge air temps better than the stock unit. The site also mentions that this core is a bar and plate construction which should make it more efficient than the tube and fin core style of the stock unit. Price is negligible in this instance, because it came as part of the intercooler kit (also in the kit was all the piping, silicone couplers, and clamps needed for installation) but expect to pay around $400 dollars U.S. for everything to be shipped to your door.

With all of the specs out of the way, you probably want to know how it performed, right?

Forgive me for not doing my due diligence in this comparison. I had logs. I really did, and then I had a brain fart and somehow deleted all my stock logs. So for the purpose of this comparison I will have to leave the conclusion open to conjecture. In other words, this is going to be mostly my opinion with no real facts to back it up. Just like everything else on the internet!

Owners of Mazdaspeed 3’s (especially the Gen 2’s) know that the top mount once it get heat soaked is going to hurt performance. After performing a couple pulls on summer heat, the TMIC gives up and your turbo starts working harder. One immediate improvement that moving the intercooler to the front of car is that the core is less likely to get heat soaked at idle/sitting in traffic. After installing the CX Racing core, I could get IAT’s (Intake Air Temperature) that were about 4 to 5 degrees above ambient after leaving a stop light. Across the board, the temps with the CX Racing core were lower than the stock TMIC. If you were to ask me if the CX Racing core was an improvement over the stock unit, I would say yes.

If you were to ask me if I was pleased with the CX Racing setup? We might have some issues. The stock crash bar location puts the intercooler low, which is a good thing. On the Gen 1’s this is a prime location because that generation has the grille in the perfect spot so that the intercooler can receive direct air flow. The Gen 2? Not so much. The 2nd generation bumper and grille is designed differently, and the intercooler is shrouded a bit, which could affect air flow. I can not fault CX Racing for that, it is a Mazda design issue, they made the best of what they had to work with.

If you are reading this, wondering if you should pick up a CX Racing kit, I would say go for it, but with some reservations. If you want a better intercooler, do not plan on modding your much, and want that sweet street cred for running a front mount setup? Go for it. A better quality TMIC is about the same price, but has the same issue with heat soak. Using this front mount setup would be a good mild upgrade.

So you wonder, if it is a good upgrade, why am I changing it for something else? Good question.

Once I had the CX core installed for a while, I resumed my datalogging (I am working my way through a tune). What I found was that as the CX core was an improvement over the stock TMIC, it was having a problem keeping the charge cool if I were to do back to back pulls. My car sees a lot of street driving, but also I plan to make some motorsports events where the car will see back to back pulls (i.e. track days) and the behavior I was seeing with the CX Racing core was causing me a bit of trepidation. As I am tuning the car, I want it to be able to deliver the best performance, and the logs were showing me that this core was not going to be able to handle said performance. I am running higher than stock boost and I am slightly concerned that as the power level increases, the smaller core of the CX kit might become a bottleneck.

Rather than risk an issue down the line, I decided to swap the core for a different one.

That is when I found the Mishimoto S-Line.

Mishimoto (https://www.mishimoto.com/automotive/intercoolers.html?category=347) offers a range of different constructions and sizes with their Universal line of intercoolers. A popular intercooler with the Mazdaspeed 3 crowd is the M-Line. These are TIG-welded intercoolers featuring a 3″ thick core, with 3″ inlet and outlet, with a core height of 11.75″. They come in Silver, Black, and the Gold Eat Sleep Race edition. I was going to purchase an M-Line but after a bit of research, I decided to try something else.

For just $12.00 dollars more than the price of the M-Line, the S-Line intercooler (https://www.mishimoto.com/mishimoto-universal-front-mount-intercooler-s-line.html) was exactly what I was looking for. It shares some stats with the M-Line (3″ core thickness, 3″ inlet and outlet) but has a core height of 12″ and is constructed with a bar and plate core instead of the tube and fin core of the M-Line. I will elaborate more on the core construction in the Start-Up Series intercooler article, but for the purpose of this article, bar and plate construction provides better heat transfer than the tube and fin setup. The S-Line is also significantly larger than the CX Racing core, I hoped that the increased surface area would provide the charge cooling I was looking for.

Installation of the S-Line was a bit of a challenge, (see the video here on the site!) because of its size, the stock crash bar had to be replaced. James Barone Racing (http://www.jamesbaroneracing.com) makes a replacement crash bar for the Mazdaspeed 3 that is for the Treadstone TR8 setup, I decided to save myself some time and anguish (HA!) by using this a shortcut instead of welding up a crash bar myself. Once the S-Line was installed, it was time for the test!

In all fairness, when I logged the data for the CX Racing intercooler, it was during a stretch of hot 90+ degree days in July. I was not able to install the Mishimoto S-Line until September, but thankfully there were some days were the temps were close to those days in July (high 80’s), but not exactly the same. Just wanted to throw that out there.

The S-Line being a bigger core has its advantages. A large percentage of the intercooler sits in the open mouth of the Bayson R Motorsports (http://www.baysonr.com) grille I installed back when I did the CX Racing video. More intercooler in the direct air flow = better cooling. In hindsight, I wish I would have installed the CX Racing core on the JBR crash bar and logged that. The JBR setup would have put all of the CX core in direct air flow and I am going to hypothesize that would have aided the core in being able to dissipate the heat better.

Hmm, might make a note of this for later…

In testing, I noticed that after 2 – 3 pulls, the CX core would begin to struggle with IAT’s 10 – 15 degrees above ambient. Shutting the car off and letting it cool would bring the temps down, but once the pulls begin, the IAT’s would jump again. The S-Line, on the other hand, shrugged off repeated pulls with ease. One example, I did three pulls, back to back to back. Each time, the S-Line was able to pull charge temps back down to within 3 degrees of ambient temperature!

In traffic, it will drop temps as soon as the car is in motion. I have been driving the Speed 3 daily since I installed the S-Line and I am really pleased with the performance of the intercooler. The only small complaint I have, if you can even call it that, is that I am experiencing a small amount of lag. To the uninitiated driver, it is probably unnoticeable. To the seasoned Mazdaspeed 3 pilot, there is a very small delay between the opening of the throttle and turbo response compared to a stock TMIC equipped car. Granted, there is now piping and a large core to push air through, so a little bit of lag is expected, but it is nothing major.

In the end, I learned that depending on your build there are some options available for the Mazdaspeed 3 platform to handle your intercooling needs.

For the owners that want to increase their charge cooling on a budget, the CX Racing kit is a good deal. The piping is universal, it comes with all the clamps and couplers you will need, and you can use the kit’s intercooler while you save up to buy a larger core later on. If you do not plan on buying a lot of bolt-ons, or just want more efficiency than the stock TMIC, definitely go for it.

But if your plans include big HP numbers, big turbo, and very high performance, you might want to look at a Treadstone TR8 or a Mishimoto S-Line, like I did. The costs associated with going this route are going to be higher than the CX kit (custom crash bar is definitely on the list, the intercooler is going to be a separate purchase, clamps and couplers, etc..) but the performance potential will be far greater (Mishimoto lists the Max Rec. PSI of the S-Line @ 32 p.s.i.!), allowing you peace of mind knowing that the intercooler will support the power level you throw at it.

No matter what you choose, make sure to do your research first!

See you guys on the next one!

Project TMB: Tearing It Down Part 1